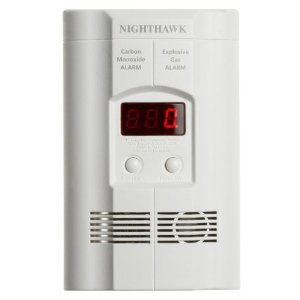 Ella and I went to our aunt and uncle’s house to clean this morning as we do every other week. At lunch time uncle R passed gas and blamed it on Ella, who had a good laugh about it.  About thirty seconds later their gas/carbon dioxide alarm began going off.  This was not the first time this had happened, and uncle R, being perplexed by these “false” alarms, went on to Amazon.com to check the reviews on their Kidde KN-COEG-3 Nighthawk Plug-In Carbon Monoxide and Explosive Gas Alarm with Battery Backup. It follows:

This Is A Great Gadget If Enjoyed Properly, December 5, 2009
This review is from: Kidde KN-COEG-3 Nighthawk Plug-In Carbon Monoxide and Explosive Gas Alarm with Battery Backup (Tools & Home Improvement)

We began experiencing false alarms with this gadget at a disturbing rate. At first, we panicked, believing  that our lives might be in jeopardy at the time of each alarm. After “airing” the gadget out, we reset and reinstalled the gadget several times but it continued to give GAS alarms. Finally, we went online and read the reviews of this gadget and learned of its propensity to give “false alarms”. Particularly helpful was the family that reported that they had lovingly renamed the gadget their “FBT” – short for the “Fart Beepy Thing”. That gave us the idea for how to realize the true value of our very own FBT.

If you walk by the gadget and let one rip (i.e. backfire or blow mud), the gadget will go off in anywhere from 10-60 seconds and begin flashing the GAS alert. The length of time it takes to set the alarm off depends upon the severity of the individual air biscuit
that was released. From our experience, Sloppy Joe mud ducks are far worse than cheap beer stink bombs. The best part is that, after setting off the alarm, you can then press one of the buttons and the gadget will quantify your stink burger, giving you a numerical rating of the severity of the blast. From our experience, a 200 level rip reflects a modest beer blast, while a 218 level reflects a much more serious effort. So far, the best exterminator we have been able to register was a 221 beauty that surely resulted in a clothing change.

Just think of all the party and gaming opportunities this gadget presents. It is well worth the price of purchase as a party activity.

By the way, this gadget probably sucks as a life saving device because you have no way of distinguishing a routine doggy blaster from a more serious Natural Gas leak. We think a caged parakeet may be more reliable in this regard. When it stops chirping, you know to get the hell out of your house.

OMG, this is truly hilarious and I want one, if only for the fact that I will be able to tell who broke wind while standing next to it.  While I’m at it, I think I’ll buy one for Trisha also… her family would LOVE it… I envision games of who can get the highest explosive gas rating. Truly a life saving tool with a sense of humor… I highly recommend it…

2 thoughts on “A Fart Detector… just what you always needed.”